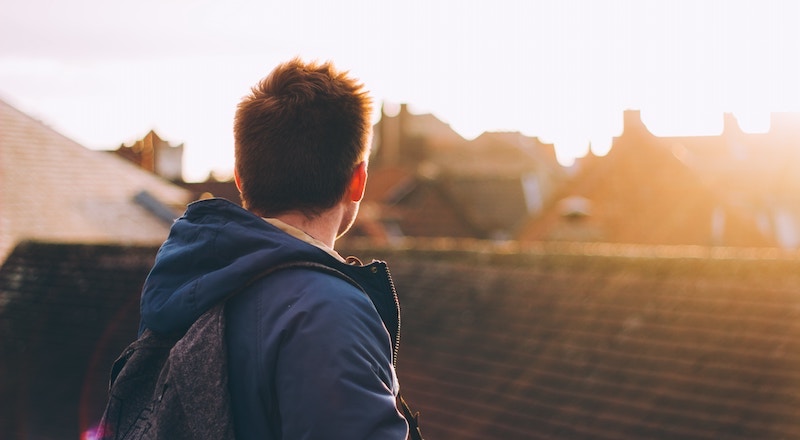 How far would you go to get a foot on the housing ladder? Would you sacrifice holidays, delay relationships, or move back home with your parents?

According to our recent survey of 2,000 home owners, this is precisely what many of today’s generation of home buyers are doing.

In this article, we look deeper into our research to uncover some of the more proactive steps people are taking in order to get onto the ladder.

Their answers showed us that not only are hopeful buyers cutting back on luxuries and making savings where they can, many are making major life decisions to get on the property ladder faster.

When did the property dream become a pipe dream?

Our Mortgage Expert, Dilpreet Bhagrath, is fully aware of the pain felt by many hopeful buyers.

“It can be extremely difficult for young people to get on the property ladder, especially if they’re already renting. A first-time buyer’s deposit costs nearly two years’ average earnings, and that’s before taking any other spending into account. So many people find themselves making huge sacrifices to reach their dream of home ownership.”

With an ever widening gap between the average income and the average house price, getting on the property ladder seems to be causing today’s buyers to question major life decisions: “Will I earn enough working in field I’m passionate about?” and “Will I be able to afford a home with a particular partner?”

Many of the mortgage holders we spoke to admitted that their choice of partner was influenced by their desire to get on the housing ladder.

11% of home owners between 35-54 admitted to allowing their romantic intentions to be overridden by the desire to own.

The number was even higher amongst millennials, where a whopping 25% of those surveyed said their choice of partner would be influenced by their aspirations to get on the property ladder.

Love might be blind but it seems it still has a nose for a suitor with a steady job and incremental salary package!

They could be onto something with their tough selection criteria, however. A quarter said they’d buy a house with someone after just one year in a relationship.

But beware, millennials… 16% also admitted that they bought with a partner when they’d have preferred to buy alone in order to get on the property ladder sooner.

Choosing a career that pays

Of the 2,000 people who contributed to our survey, one in six (15%) said they chose their career based on how quickly it would help them earn enough to buy a home.

Surprisingly, of millennials - widely regarded as the generation who want more fulfilment from their work - one in four said they focused on a career that would help them quickly climb the property ladder.

Pulling off this strategy can mean achieving your goals years before the rest of your peers, but the downside is that you could risk being lumbered in a job you don’t hold a lot of love for.

One in five millennials also said their desire to own a home heavily influenced their choice of degree. By comparison, only 9% of 35-54 year olds and 3% of people over 55 who took part in our survey said they chose a career based on its ability to help them buy.

Many people we spoke to have made other sacrifices throughout their careers.

9% said they’d left a job where they were perfectly happy in order to earn more money to buy a home. Another 10% said their desire to buy encouraged them to choose a job based purely on salary.

Dilpreet says, “First-time buyers in major UK cities now need an average income of at least £53,000 to get on the property ladder due to steep house prices and increasingly large deposits. This might encourage some people to chase higher-paying jobs, but it’s also pushing many people away from city life. 10% of home owners said they moved out to the suburbs in order to afford their first home.”

Settling in the suburbs

Those who don’t fancy compromising on love or their career, could always choose location.

For some, deciding to up sticks and move to a part of the country where house prices are cheaper and the cost of living is lower is a temporary measure. For others, it’s a longer term strategy that allows them to save up for a deposit more quickly.

Of the people we spoke to, 29% moved to a more affordable location in order to get on the housing ladder sooner.

Account Executive Emma Lumley knows this situation only too well. After graduating from university she moved to Oxford, where her outgoings for rent and bills came to around £700 a month.

On a graduate salary, she was left with little disposable income. Saving money for anything, let alone a deposit, was little more than a pipe dream.

When her landlord announced their plans to sell the house she was living in, Emma made the decision to move back to her hometown of Nottingham rather than look for another expensive rental in Oxford.

Weighing up both the positives and negatives, she realised she could rent a city centre flat in Nottingham for around £500 a month – much less than what she was paying in Oxford.

But after a few weeks back home, she made the decision to move back in with her parents so she could save up the cash to buy her own property in the city centre.

Emma, who’s currently in the process of buying a house, says “It’s crazy to think that I was struggling to make ends meet in a five person shared house in Oxford, yet it only took me a matter of months to save enough to buy a nice flat in town.

“I think it’s a shame that people aren’t able to get onto the property ladder because of their location. I’m very fortunate to be able to call ‘home’ an affordable place to live.”

Has she any regrets about moving to a smaller town in order to achieve her dream?

“None. I miss some of my old work colleagues, but I have friends all over the country. So for me it’s another group of friends I get an excuse to go and visit. I just wish that I’d considered buying a property sooner!”

The cheapest places to live and save for a deposit

As more people consider moving to more affordable areas of the country, we decided to take a look into where you could save towards a deposit quickest.

Thanks to data from the Office of National Statistics (ONS) and the BBC, we were able to compare the average cost of rent and living expenses (food, clothing, transport, etc) across the UK.

As expected, regions to the south tend to have the highest rents while the most affordable rents can be found in the North East (£544), Yorkshire and the Humber (£585), and the North West (£625). 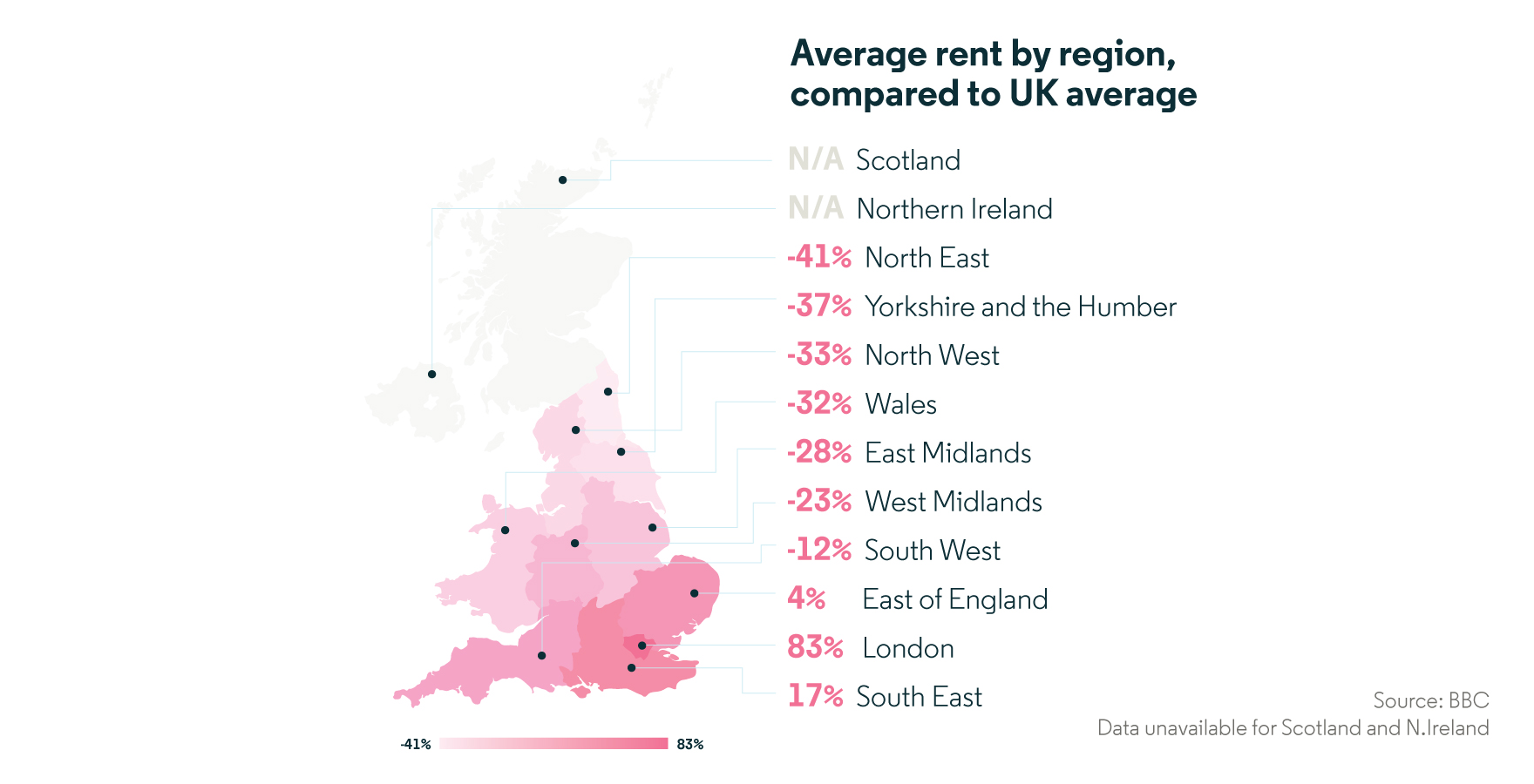 The lowest cost of living can be found in Northern Ireland, Yorkshire and the Humber, Wales, and the West Midlands, which were all 2% cheaper than the national average. 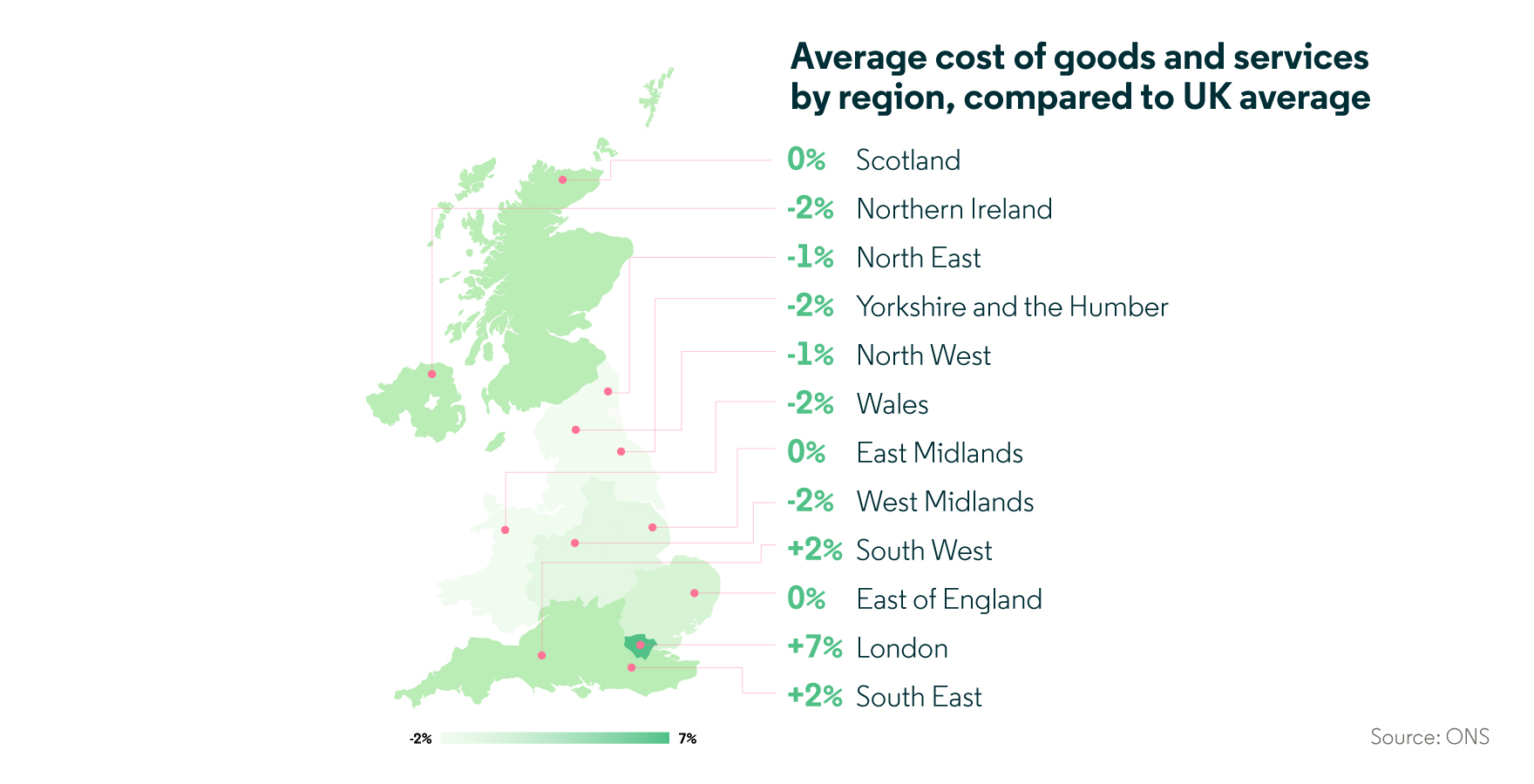