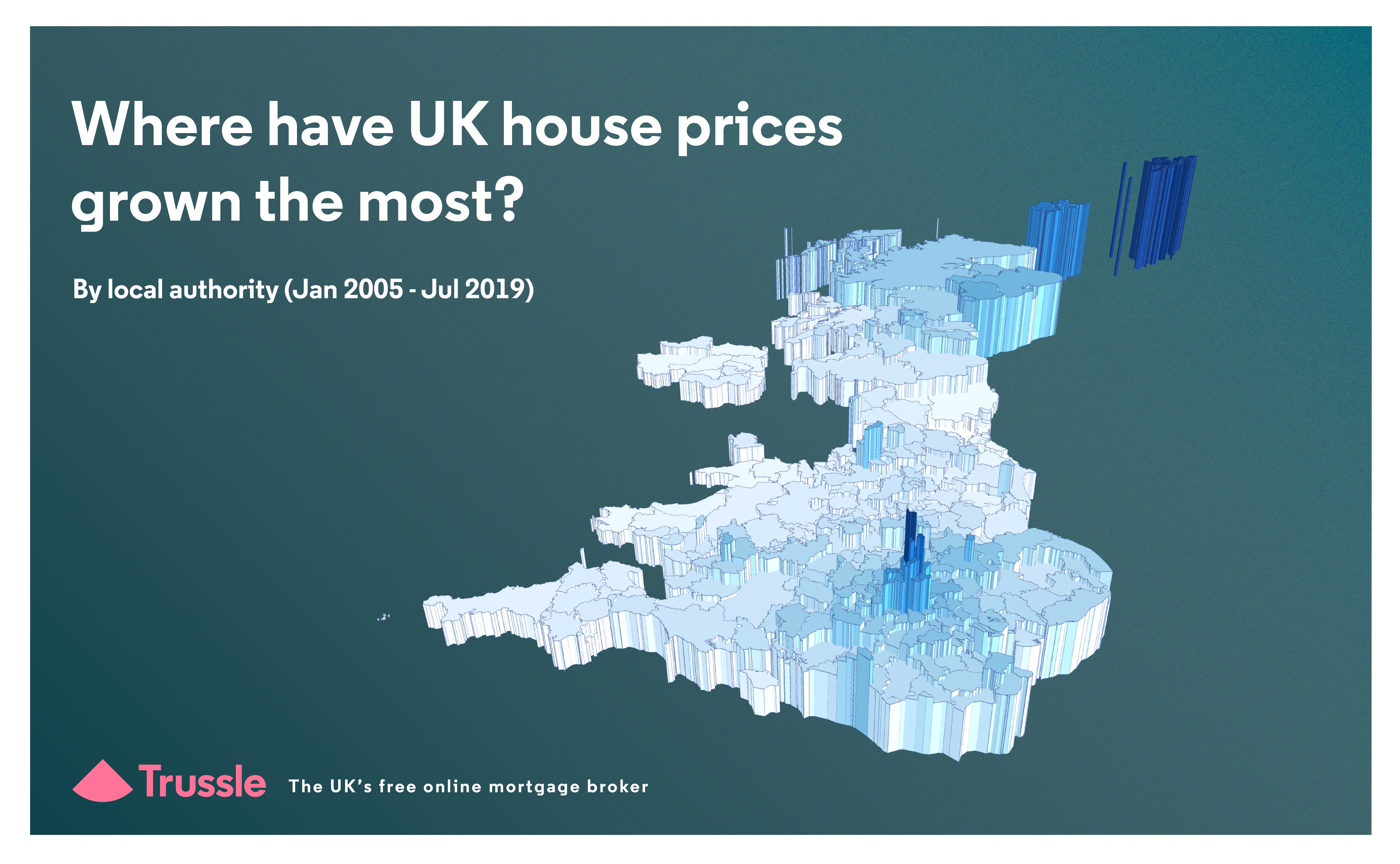 The lack of affordable housing remains one of the largest issues facing the current generation.

The average home in England and Wales cost a full-time worker 7.8 times their salary in 2018. (1)

But UK house price growth has been remarkably different around the UK. 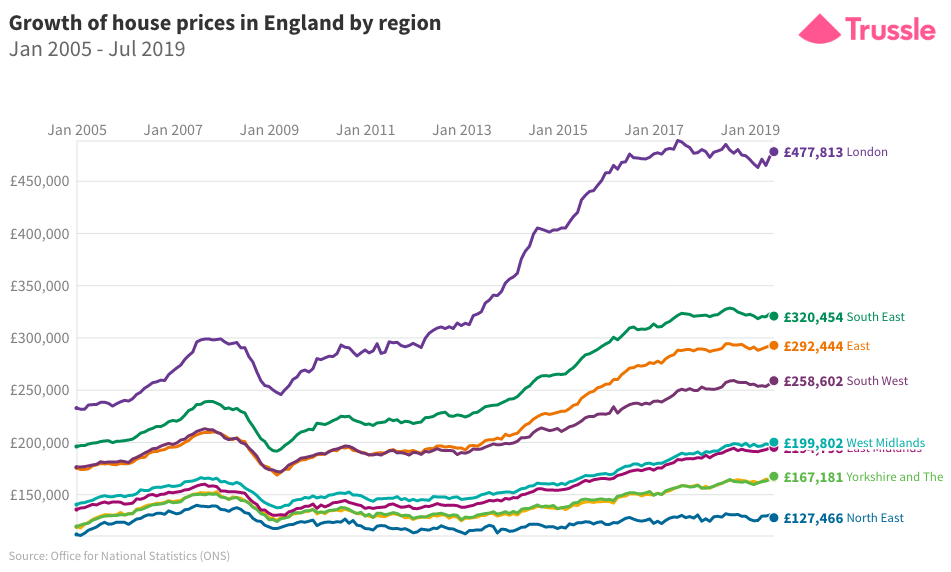 And we also spoke to local estate agents to find out what was happening on the ground.

You might not be surprised to hear that the Royal Borough of Kensington and Chelsea, home to Kensington Palace and Harrods, has experienced the highest house price growth since January 2005.

But what might surprise you is that the west London borough shares the top spot with Shetland, the subarctic Scottish archipelago widely known for its knitted jumpers.

House prices in both areas have jumped by a staggering 171%. That’s far higher than the national UK average increase of 55%.

Meanwhile, average house prices in the seaside resort of Blackpool have fallen since January 2005, the only authority in our research to have experienced a drop. 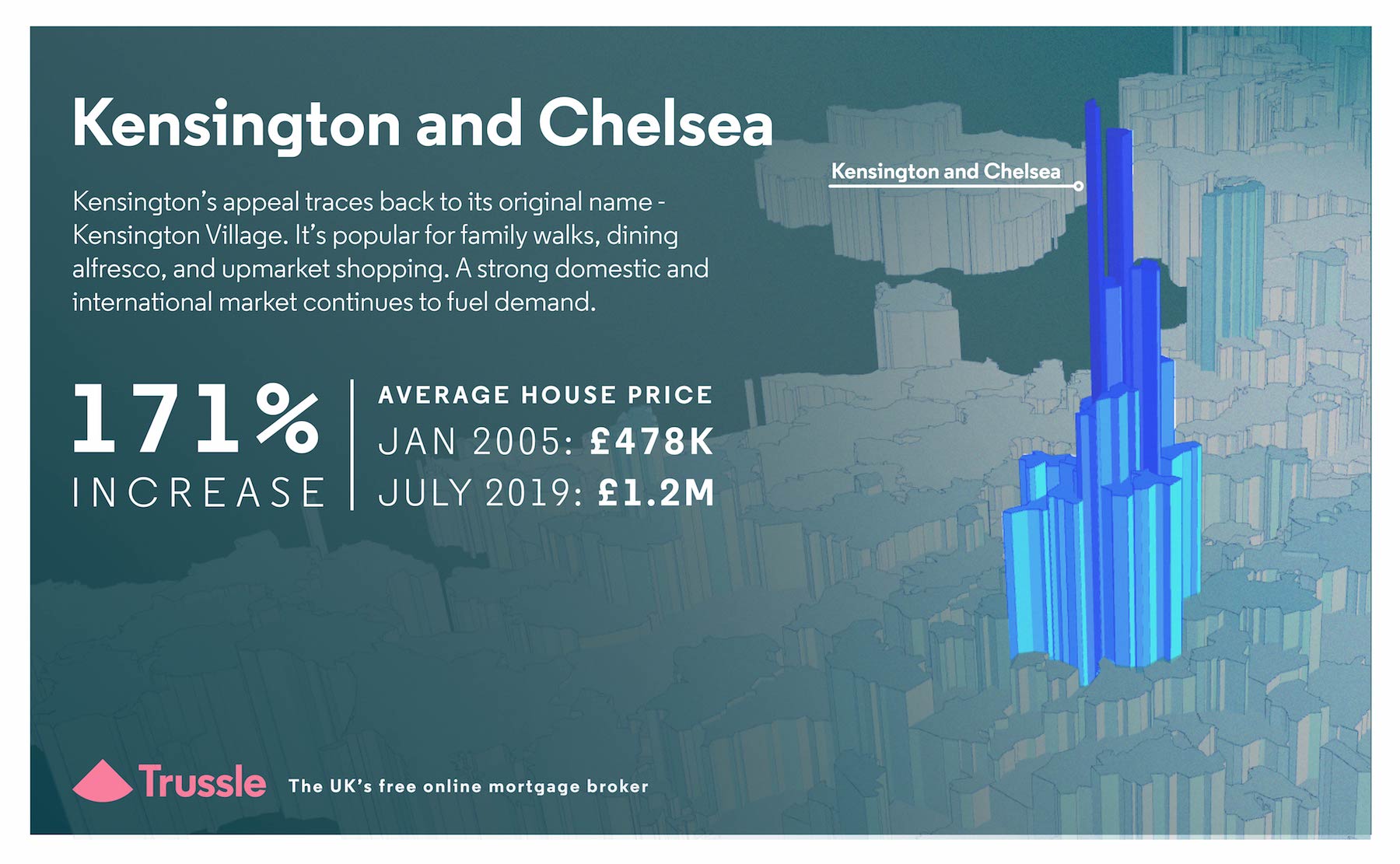 Given its unflagging desirability, it’s no surprise that the royal borough attracts people with extremely deep pockets.

“Walking around the borough at the weekend the most common sight is families walking, dining alfresco and shopping.”

There’s a real mix of people buying homes in the area, he said, with a strong domestic and international market.

Despite economic uncertainties, prices in the borough will continue to rise, he predicted.

“Markets don’t like uncertainty, so as you can imagine, it’s not the greatest market for buyers. But where one opportunity dwindles, another normally appears.

“The weak pound has encouraged dollar-denominated buyers into the Royal Borough of Kensington and Chelsea, and people need somewhere to live, so we’re having a reasonable year.

“There is a finite supply of land in the borough and migration into London is not forecast to slow, so prices will go up.”

You’d be forgiven for thinking that the average property price of £1,295,861 would get you a four-bedroom house.

But most properties for sale on Zoopla at that price are two-bedroom flats. (4) 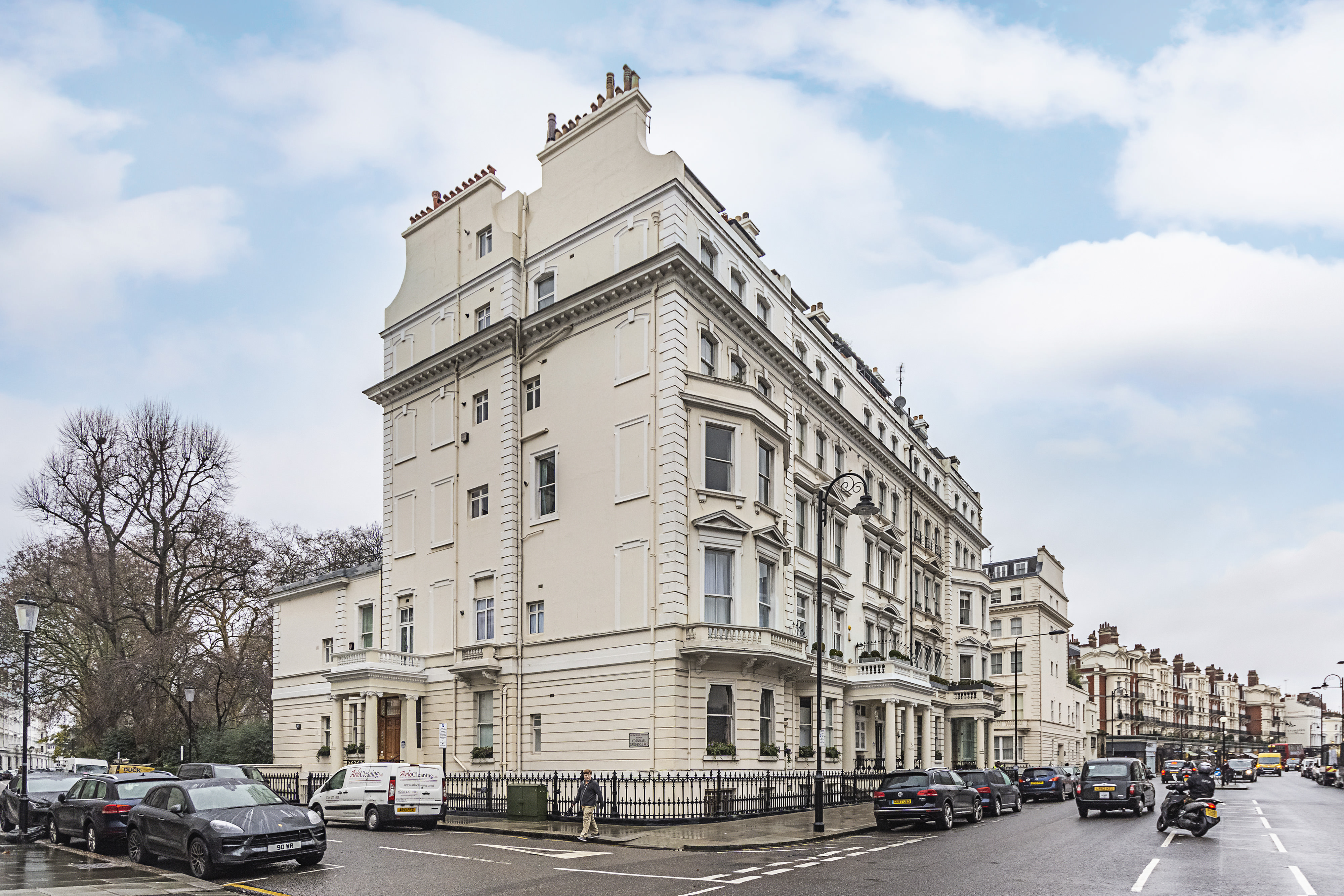 This two-bedroom flat in Cornwall Gardens, London SW7, is for sale with Hamptons International for £1,250,000. 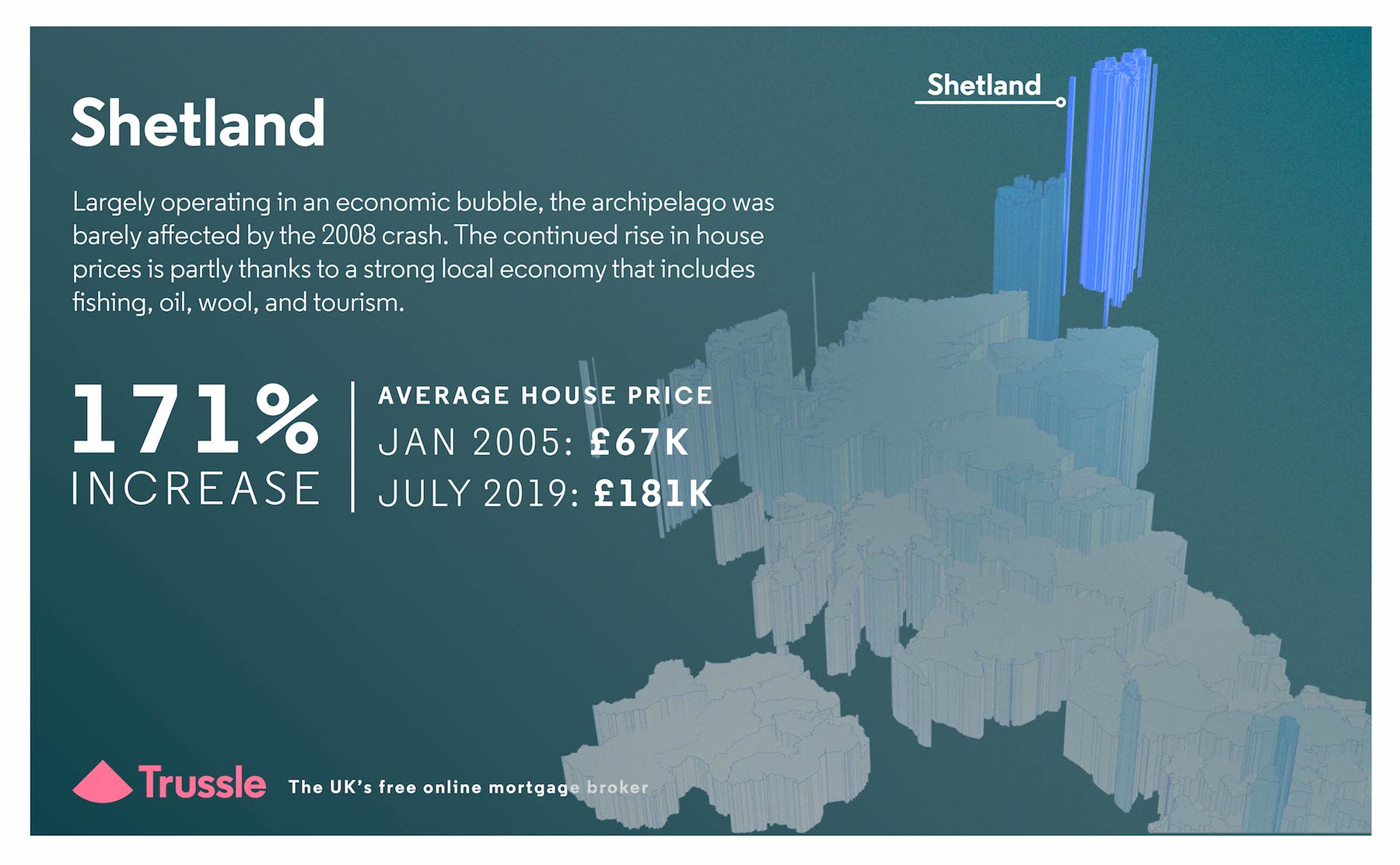 The other reason is that Shetland sometimes operates in a bubble and was barely affected by the 2008 credit crunch and the oil price crash, he said.

“Whereas most other places had to climb back up again to pre-2008 levels, let alone increase any higher, that was not the case here, which is why over the longer period the market here has performed comparatively well,” said Mr Bell.

“We sometimes operate in a bit of a bubble and have been fortunate to have had a strong local economy while some areas have struggled from time to time.

“Shetland only has 23,000 residents, so there’s never a huge amount for sale. That keeps prices stable.”

The average house price in Shetland could buy you a three-bedroom detached house with a garden, garage and views. And you’d still have some change. 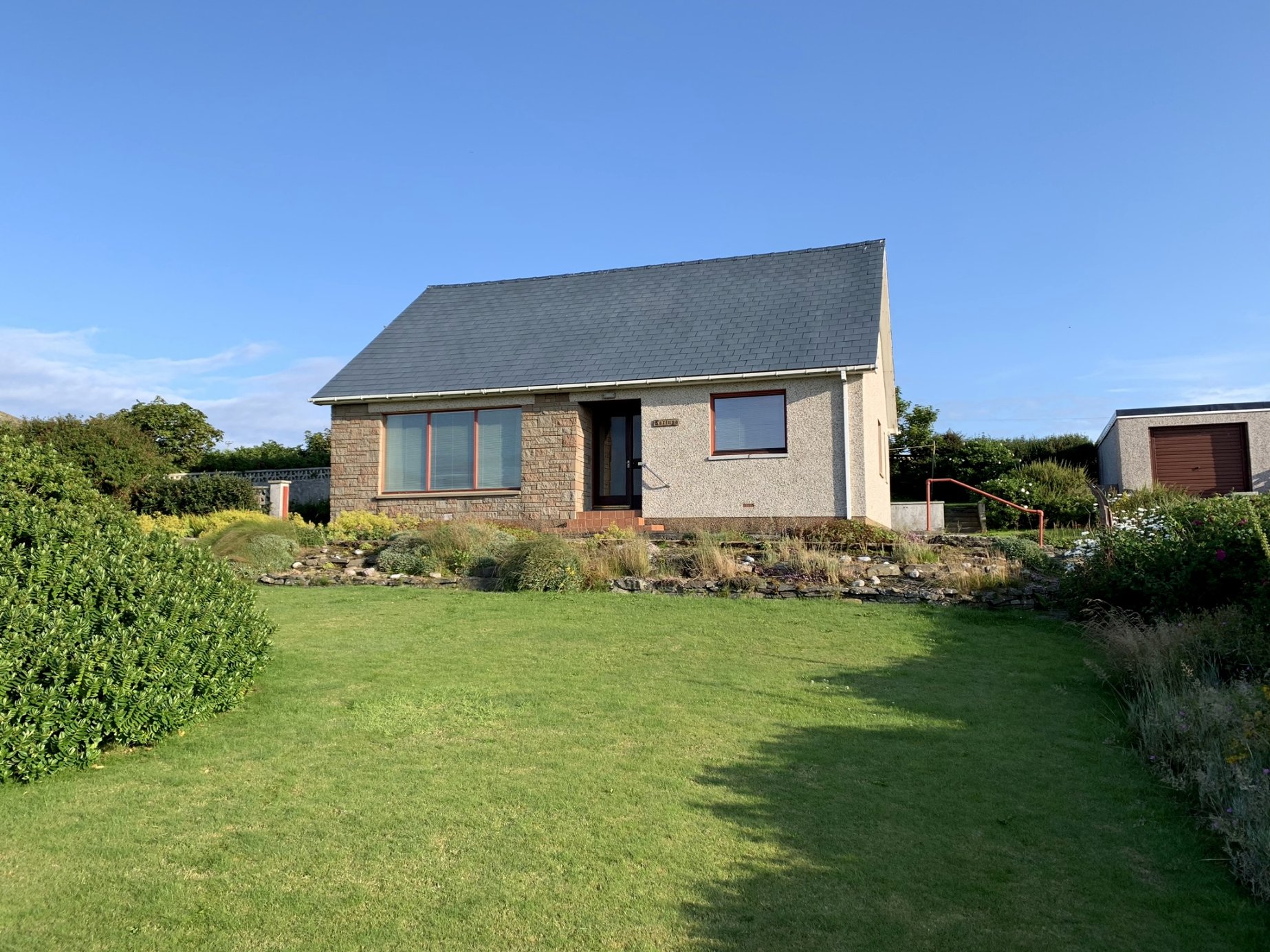 Offers over £175,000 are invited for this three-bedroom detached house in Exnaboe, Virkie, Shetland, for sale with Harper Macleod. 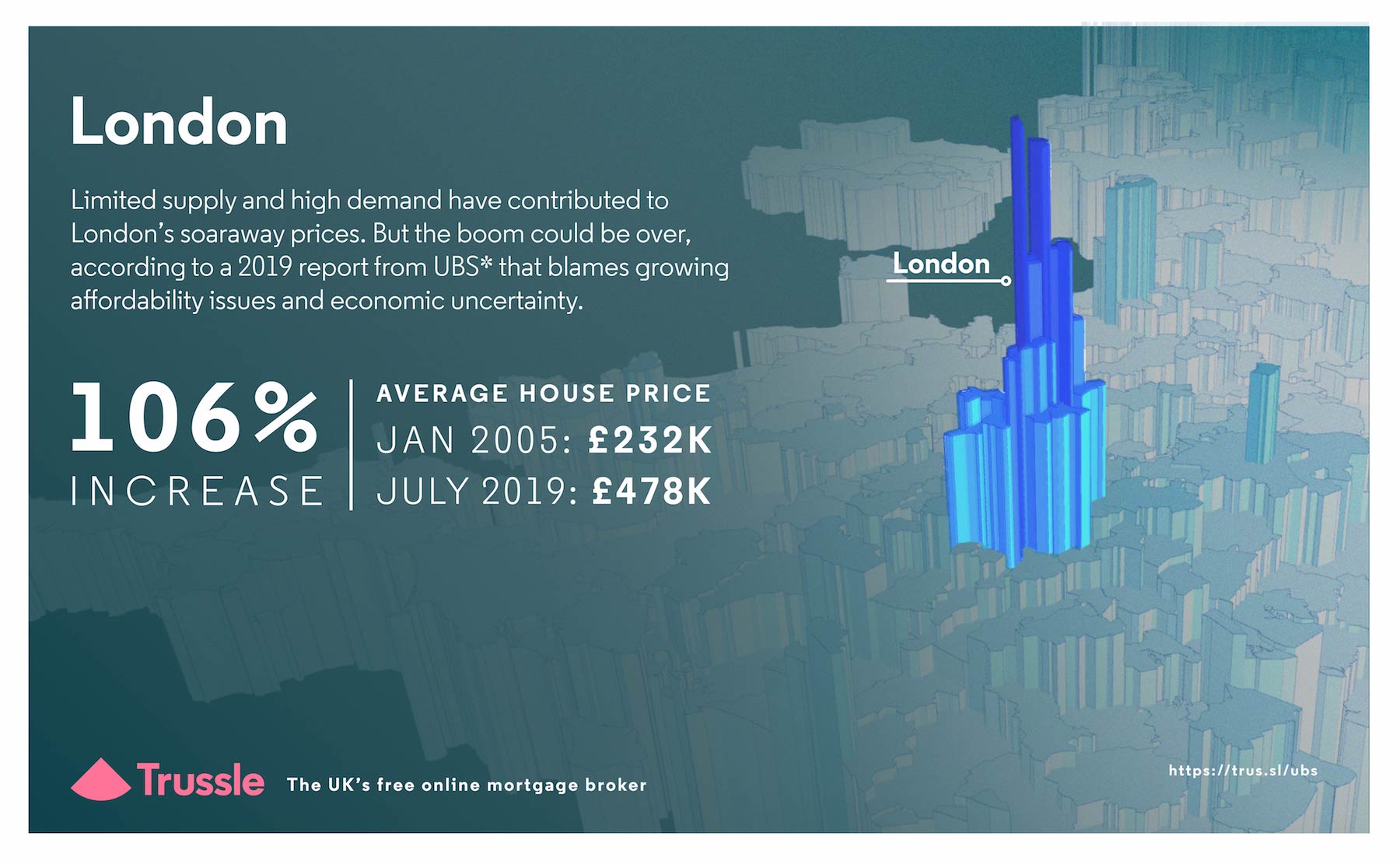 Perhaps not surprisingly, 17 were in London. (3)

Limited supply and high demand are two of the more talked about reasons for London’s historic soaraway prices.

But the city’s housing market boom could be over, according to the UBS Global Real Estate Bubble Index. (5)

“The years when prices soared by 50% (2012-16) are long gone,” the report stated. “Inflation-adjusted prices have been trending downward for a while.”

The report blames “growing affordability issues” along with an uncertain economic outlook for the recent trend.

Despite the recent price decline, even a highly skilled employee needs to work 14 years to buy a 650 sq ft flat near the city centre, the report said. 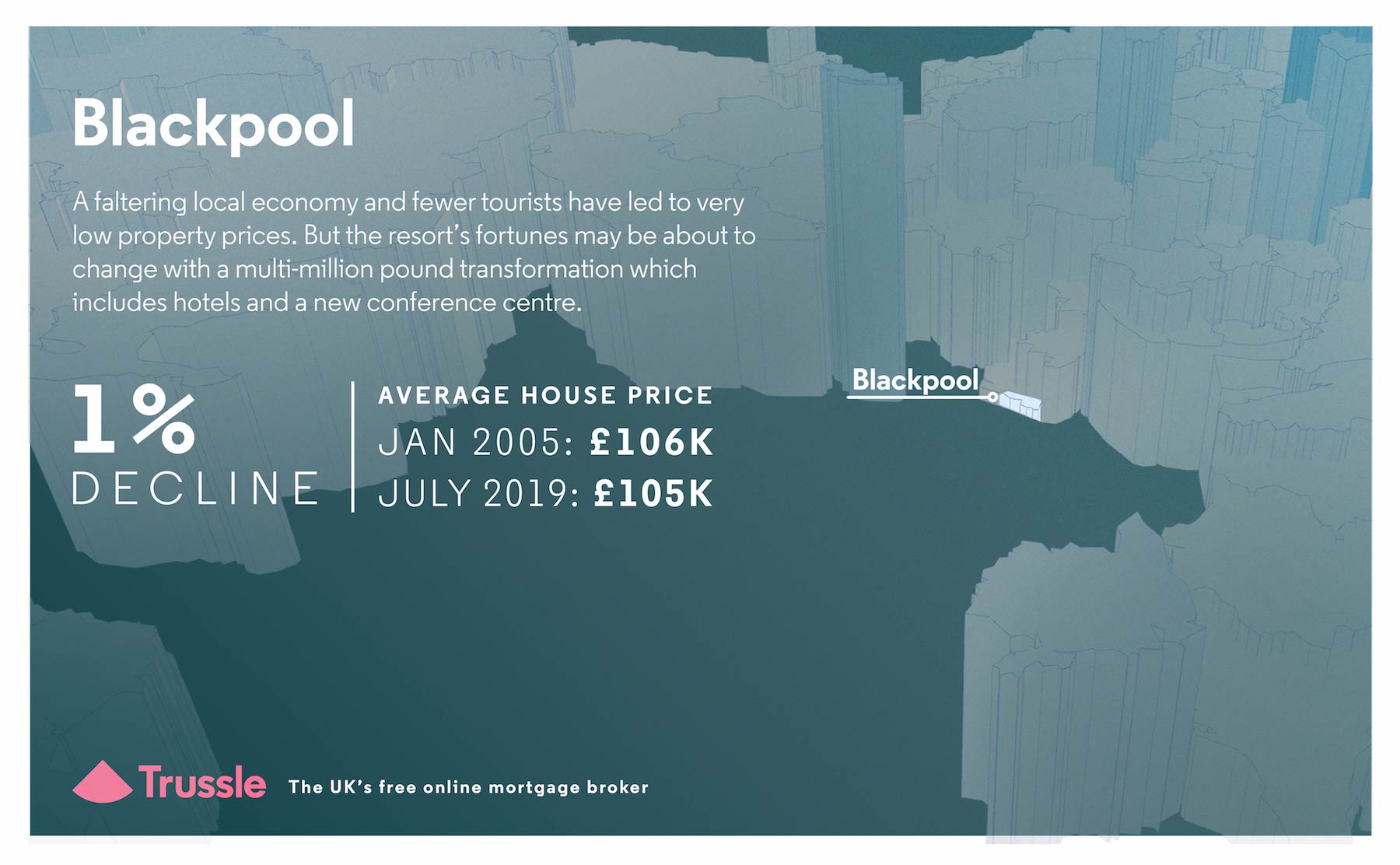 Blackpool is the only local authority in our analysis that has seen an overall drop in house prices since 2005.

This represents an overall decline of 1%.

Blackpool’s struggles may well have been due to its dwindling tourists.

“It has the prerequisite beach promenade and pier, accompanied by other specialist seaside infrastructure, bed and breakfast accommodation and a stagnant economy dependent upon holiday-makers who are dwindling in number.”

Eight of the 10 most deprived neighbourhoods in England are now in Blackpool, according to government figures published in September 2019. (7)

But Blackpool estate agent Darren McKenzie is convinced there’s a property boom just around the corner.

“2007 was the peak, so in 2005 prices were already quite high,” said Mr McKenzie, Managing Director of McKenzie Estate Agents.

“In 2008 we had the crash which affected prices quite heavily around here. Slowly but surely they’ve gradually gone up and I would say we’re at about 2005 prices now.

“We’re due a boom any time now. I think we’ve already started what with all the redevelopment and regeneration - and I highly suspect a super-casino.”

Blackpool Council said that the town’s £300 million leisure development will bring world-class visitor attractions to the town, including the world’s first multimedia exhibition of its kind. (8)

The development will also include new hotels, restaurants, a food market, and residential apartments.

The Boulevard, the town’s first luxury hotel, recently opened next to the iconic Pleasure Beach at a reported cost of £12million. (9)

“I think we’re in the throes of a natural boom that was due. Throw in all the regeneration and I honestly feel we’re heading for a very bright future.”

The average house price in Blackpool could get you a three-bedroom house. 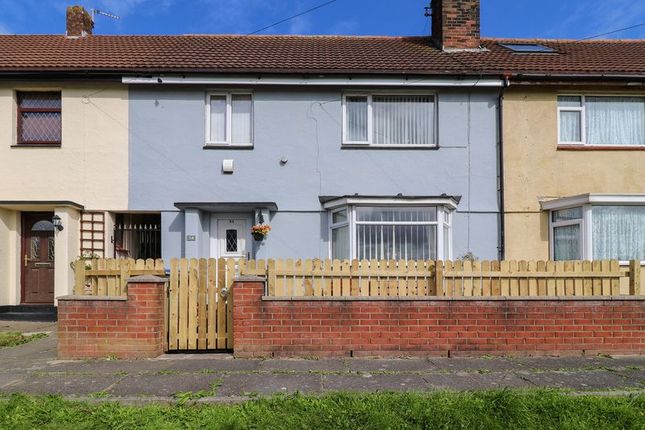 Offers in the region of £100,000 are invited for this three-bedroom home in Bathurst Avenue, Blackpool, for sale with McKenzie Estate Agents.

With the continuing economic uncertainty, what happens to Blackpool’s house prices - and those of the rest of the UK - is anyone’s guess.

But for the short term at least, housing affordability for many regions, particularly London, will remain a pressing concern.

Want to know how house prices have changed where you live?

Check out our charts to see how house prices have changed in your region.

*Figures include all UK local authorities, excluding the Isles of Scilly and Somerset West and Taunton, which were unavailable at the time of publication. All data was sourced on 7th October, 2019.